A piece of history 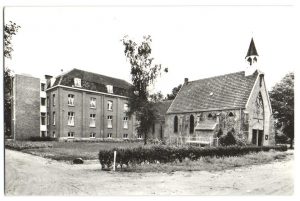 Klooster Nieuwkerk Goirle is a Dutch monastry situated in the area ‘Nieuwkerk’. This nature reserve is located on the Dutch-Belgian border between the towns of Goirle (NL) and Poppel (BE). The area had an important role during the 80-year war. In 1639 they build a border church. As a result the city of Tilburg decided to also built a border church in 1652. The area known as Steenvoirt till then, now was renamed Nieuwkerk. In 1799 the border church was torn down and on that same spot arose the chapel of Sint-Jans-Gool. This chapel still exists and was restorated in the 80’s.

The estate that was formed at that time belonged to ‘De Meester de Betzenbroek’. He decided to built a monastry on the estate that was inducted on June 1st 1913. Priests who were in training got the opportunity to study in this monastry. By the end of the 50’s the ‘Trappisten’ settled into the monastry and after that the Fransiscans bought the monastry and turned it into a rest home for retired Sisters. Then came the Priest Brotherhood of Sint Pius X who settled in and after that it was the home of a congregation of Maastricht. De present owner of the monastry is a Belgian Baron who bought the monastry from the Fransiscans back in 1986.

In 1997 there came an end to the religious function of the monastry and a private person turned it into a reflection and congress center. As such it opened its doors in 2006. Unfortunately this formula didn’t proof to be economically viable. Therefore in 2012 Anke and Frans Naalden decided to give the monastry a new destiny; a place where everybody is welcomed wholeheartedly and where only one thing is imporant; to enjoy life!

About
Partners
Gallery
Scroll to top

Cookies are small text files that can be used by websites to make user experiences more efficient. By law, we may store cookies on your device if they are strictly necessary for the use of the site.